Two weeks ago, my friend Andi messaged me about a mathematical game she had invented.  She was so excited to share it.  She had coded up a "proof of concept" version in html, and had come up with a mathematical proof about its winning strategies.  She was enthusiastic about its potential to make math fun even for non-math people, and full of ideas for next steps.

Then two days ago, I learned that Andi died.  It seems that this game is one of the last things she put into the world.  Although I didn't know her as well as I might have, her excitement about sharing this game seems to typify the passion and determination with which she approached all her projects.  Andi was an uncompromising advocate for social justice with a poetic eye and a keen sense of humor. Also, she was a transgender woman; I say this because visibility matters and because I believe she would not want this aspect of her identity to be erased.

The best way I can personally think of to honor Andi's memory is to share her final game with the world.  Like any well-designed game, it is easy to play but difficult to master. The rules are deceptively simple:

Next player 1 chooses 2.  So 2 and all multiples of 2 are crossed out:

To visualize what's happening in this game, it helps to draw a diagram like this: 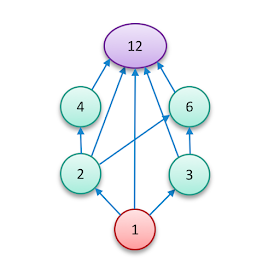 Every time you a player picks a number, that number and all numbers downstream of it are eliminated. (Here "downstream" refers to the direction the arrows are pointing, which is visually upwards.)  So, if 2 is picked, that eliminates 2, 4, 6, and 12.

But enough theory, go ahead and play!  Here's a link to the "proof of concept" version that Andi coded up.  You play against the computer, who goes first.  To try again with a different Magic Number, click "New Game". You can put in whatever Magic Number you choose, or have the computer randomly pick one.

Did you win? No, you didn't. But don't feel bad: Andi proved that, with optimal play, Player 1 will always win the game.

The interesting thing about this proof is that it's non-constructive. It says that there exists a winning strategy for Player 1, but gives no indication of what this winning strategy might be!

Andi designed her code to search through all possible game outcomes for a winning one. While this guarantees that the computer always wins, it doesn't give much insight into how one ought to play, or why certain strategies might work better than others.

Andi's final gift to the world is a good one.  Her code is available on GitHub; please use it and build on it if you are inspired. I hope she is remembered for this and for everything else she put out into the world.

I'll close with this mathematical meditation, which was one of Andi's last Facebook posts: