How do we mourn human civilization?

2019 was a lot of things. But for what I want to say here, 2019 was the year that I realized we might not save ourselves.

Just on its face, 2019 was a terrible year if you care about climate change. Arctic permafrost may have reached a tipping point. Antarctic ice melted at record pace. The Amazon burned. Meanwhile, carbon emissions continued to rise, and COP-25, the major UN forum for international climate policy, ended with essentially no progress.

But for me personally, 2019 was the year I allowed myself to consider that we might not work it out.  Not only will we not stop the first effects of climate change, we might not even stop any of them.  Faced with an existential threat to our entire civilization, we might just drive ourselves right off the fucking cliff.

Surely we will do something to stop it. Consciously or not, this thought had always been in the back of my head when thinking about climate change. Yes, the science looks bleak, the politics look intractable, and some level of crisis is probably unavoidable. But surely, at some point, human civilization will come together, face the danger ahead, and do something to stop it.

This year, I allowed myself to pluck this voice from the back of my head, hold it to the light, and examine it. Will we do something to stop it?

Well, what does our track record show? Climate change was officially identified by NASA as a severe global threat in 1988. Since then, we've had 31 years of scientific research, policy debates, and international agreements. Every international scientific and policy-making body recognizes climate change as an urgent and existential threat. And yet emissions have continued to rise, essentially without pause. 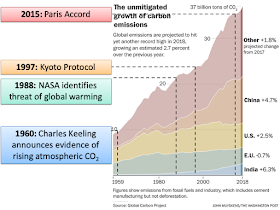 I'm an optimist at heart. I always try to look at things in the best possible light. But at this point, it's starting to look like, if we were going to save ourselves, we would have done it by now.

Surely we will stop it. We might not stop it. What if we don't stop it?

What happens if we don't take drastic action? Here is where I think that the scientific and journalistic institutions have failed to properly communicate the danger. Because the headline numbers—3 or 4 degrees Celsius, 2 meter sea-level rise by 2100—might not sound that bad at first. Why, exactly, are these numbers so scary?

First of all, with a 4°C temperature rise, 74% of the Earth's population would experience deadly heat waves every year. Multi-breadbasket failures are possible, leading to mass famine. As much as 5% of the world's population could be flooded every year by 2100. These and other catastrophes could lead to as many as a billion climate refugees by 2050.

What would this level of disruption mean for human civilization? With one tenth of the world's population displaced, can nations still maintain their borders or their identities? Can governments survive if they can't provide food or freshwater to their people? When "natural disasters" turn into commonplace occurrences, will the collective fiction known as "money" retain its value?

Questions like these defy quantitative predictions, but based on these an other considerations, researchers have described increase of 5°C or more as posing "existential threats to the majority of the population".  And while it is probably still possible to avoid this level of warming, doing so would require unprecedented economic transitions and global cooperation—and our track record so far does not give much reason for optimism.

2019 is the year I started to mourn. The year I let myself consider that the civilization we have right now might be—likely will be—the best we will ever get. That our current society—for all its wonders and flaws—could be revealed as fossil-fueled mirage that collapses before we ever build something better to replace it. That, even if homo sapiens as a species survive, what we know of as human civilization could go up in smoke, fire, and water.

Of course, the destruction will not be spread evenly, nor fairly. The countries most vulnerable to climate change, such as Bangladesh and Haiti, are among those least responsible for creating it. Still, there is reason to doubt that the political and economic systems of the West will survive extreme climate change. Already, mass migration from the Middle East and Central America (driven in part by climate change) have fueled the rise of the Far Right in Europe, Brexit in the UK, and the election of Donald Trump in the US. Currently, the US is holding thousands of these migrants in concentration camps, forcibly separated from their families. What will happen when migrants swell to 10% of the world's population, compounded with greatly increased fires, flooding, hurricanes, epidemics, and food shortages? How much strain, exactly, can our political and economic institutions take?

What had you pictured for yourself and your loved ones in 2050? I had hoped to be rounding out my career as a mathematician, with a satisfying record of scientific accomplishment and well-taught students behind me. I had hoped to be watching my son thrive in the world with at least some of the advantages that had helped me succeed. But now I'm letting myself ask, what if my college, the university system, the country, the entire economy, are gone by then? What if all we leave the next generation is a command to survive, survive at all costs?

I am not telling you to despair. Despair saps the will to act, and there is too much work to be done.  The difference between 2°C vs 3°C, or between 3°C vs 4°C, is so great that we must be out in the streets causing disruption, fighting for our futures and our lives. We must also join with each other to become resilient, to form networks of preparedness, to help the most vulnerable, and to strategize how we will adapt to whatever change will come. I am not telling you that we cannot make a difference. I believe we can and we will, and I invite you to join me, and help me, in this struggle.

But I also invite you to mourn. We can't truly grasp the urgency for action unless we emotionally grapple with the consequences of inaction. What, in human civilization, will you miss most? What will you wish we had fought harder to preserve? What imagined future will you be most heartbroken to discard?